This guide provides a simple explanation of common Rules situations. It is not a substitute for the Rules of Golf or the Player’s Edition of the Rules of Golf, which should be consulted whenever any doubt arises. For more information on the points covered, please refer to the following:

The Official Rules of Golf

“Ready Golf” means to play when you are ready – you don’t have to wait until the farthest away player has played. For example:

A round of golf is meant to be played at a prompt pace.

Your pace of play is likely to affect how long it will take other players to play their rounds, including those in your group and those in following groups. You are encouraged to allow faster groups to play through.

You should play at a prompt pace throughout the round, including the time taken to:

In stroke play, play “ready golf” in a safe and responsible way.

In match play, you and your opponent may agree that one of you will play out of turn to save time.

Before starting your round, you are advised to:

At the end of your round: 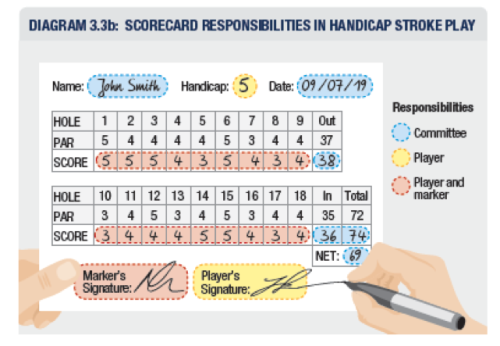 Embedded: When your ball is in its own pitch-mark made as a result of your previous stroke and where part of the ball is below the level of the ground. Your ball does not necessarily have to touch soil to be embedded (for example, grass and loose impediments may be between your ball and the soil). 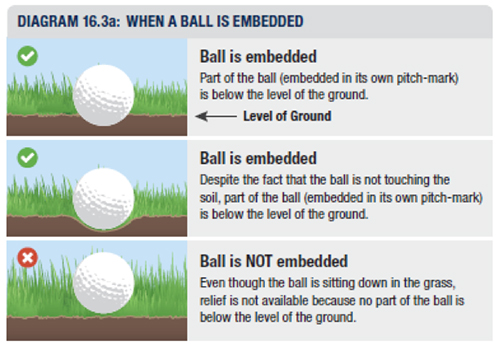 Integral object: An artificial object defined by the Committee as part of the challenge of playing the course from which free relief is not allowed.

Known or virtually certain: The standard for deciding what happened to your ball – for example, whether your ball came to rest in a penalty area, whether it moved or what caused it to move.

Known or virtually certain means more than just possible or probable. It means that either:

Loose impediment: Any unattached natural object such as:

Such natural objects are not loose if they are:

Lost: The status of a ball that is not found in three minutes after you or your caddie (or your partner or partner’s caddie) begin to search for it.

Nearest point of complete relief: Your reference point for taking free relief from an abnormal course condition or wrong green.

It is the estimated point where your ball would lie that is:

Estimating this reference point requires you to identify the choice of club, stance, swing and line of play you would have used for that stroke. 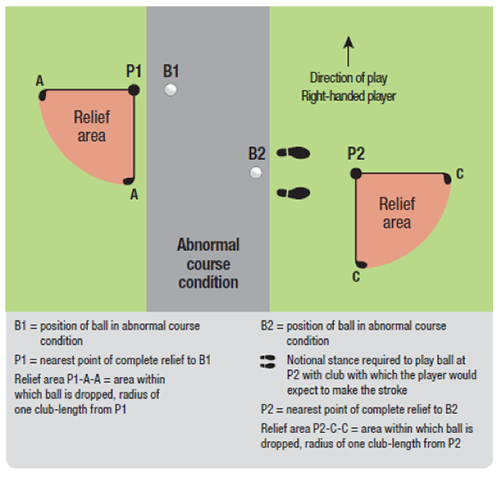 Penalty Area: An area from which relief with a one-stroke penalty is allowed if your ball comes to rest there.

Stroke and distance: The procedure and penalty when you take relief by playing a ball from where your previous stroke was made.

Teeing area: The area you must play from in starting the hole you are playing. The teeing area is a rectangle that is two club-lengths.

Temporary water: Any temporary accumulation of water on the surface of the ground (such as puddles from rain or irrigation or an overflow from a body of water) that is not in a penalty area, and can be seen before or after you take a stance (without pressing down excessively with your feet).

Wrong green: Any green on the course other than the putting green for the hole you are playing. Wrong greens are part of the general area.

The general area is described in “The Course” section above, and includes fairway, rough, bushes, trees, etc. that are not in any of the four specific areas. Common relief situations when your ball is in the general area are as follows: 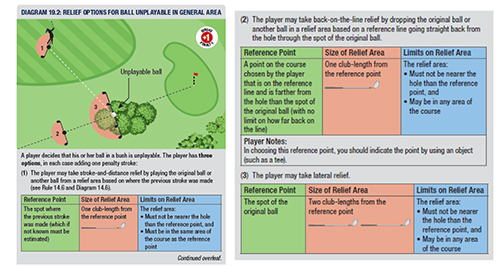 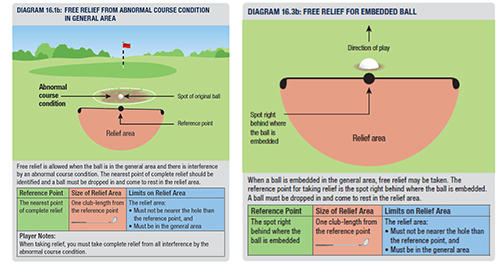 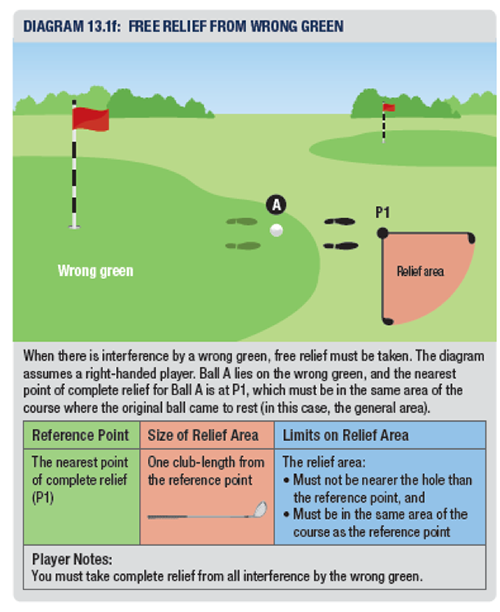 These movable natural and artificial objects are not treated as part of the challenge of playing the course, and you are normally allowed to remove them when they interfere with your play.

But you need to be careful in moving loose impediments near your ball off the putting green because you will get a penalty if moving them causes your ball to move.

Making your next stroke from where previous stroke made

This applies whenever you are required or allowed to make your next stroke from where a previous stroke was made (such as when taking stroke-and-distance relief for a lost ball or a ball that is out of bounds). 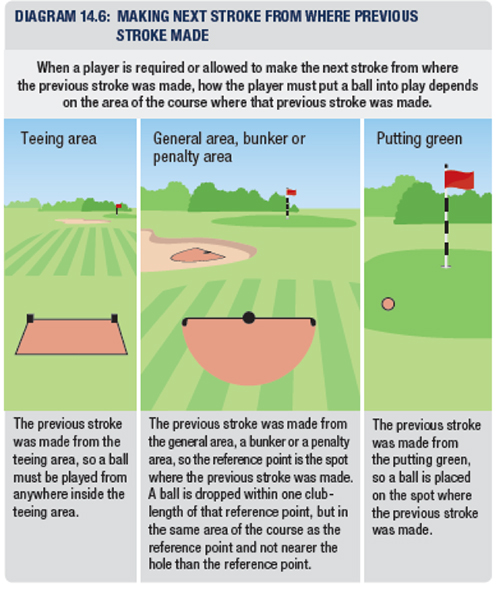 Player conduct and the Rules (Rule 1)

All players are expected to play in the spirit of the game by:

You are expected to recognise when you have breached a Rule and to be honest in applying your own penalties.

Penalties are meant to cancel out any potential advantage. There are three main penalty levels:

Your ball is in a bunker when any part of it touches sand on the ground inside the edge of the bunker.

Your ball is also in a bunker if it is inside the edge of the bunker and rests in or on a loose impediment, movable obstruction, abnormal course condition or integral object in the bunker.

If your ball lies on soil or grass or other growing or attached natural objects inside the edge of the bunker without touching sand, your ball is not in the bunker. 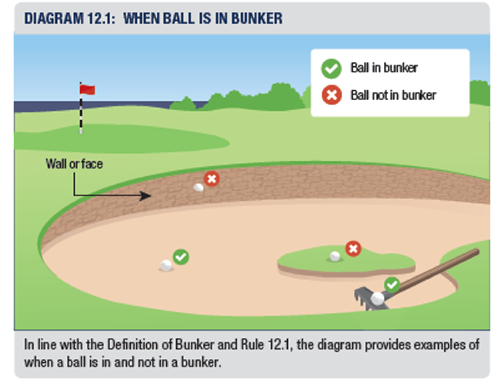 Before playing your ball in a bunker, you may remove loose impediments and movable obstructions.

Before making a stroke at your ball in a bunker, you must not:

Except as covered in the bullets above, the following actions are allowed:

Common relief situations when your ball is in a bunker are as follows:

Playing your ball as it lies (Rule 9)

It is a central principle of the game to “play your ball as it lies”.

You must play your ball at rest on the course as it lies, except when the Rules require or allow you:

If your ball comes to rest and is then moved by natural forces such as wind or water, you must play it from its new spot. But if your ball was on the putting green and it moved after being lifted and replaced, you replace it.

If your ball at rest is lifted or moved by anyone or any outside influence before the stroke is made, your ball must be replaced on its original spot.

You should take care when you are near any ball at rest, and if you cause your own ball or your opponent’s ball to move you will normally get a penalty (except on the putting green).

Play the course as you find it (Rule 8)

It is a central principle of the game to “play the course as you find it”.

When your ball comes to rest, you normally have to accept the conditions affecting the stroke and not improve them before playing the ball.

As a guide, don’t improve:

By moving, bending or breaking any:

Finding and identifying your ball (Rule 7)

You may fairly search for your ball by taking reasonable actions to find and identify it, such as moving or bending grass, bushes, tree branches and other growing or attached natural objects .

If taking such reasonable actions as part of a fair search improves the conditions affecting your stroke there is no penalty. But if the improvement results from actions that exceeded what was reasonable for a fair search, you get the general penalty.

There is no penalty if your ball is accidentally moved by you, your opponent or anyone else while trying to find or identify it, but your ball must be replaced.

You may identify your ball by seeing it come to rest or seeing your identifying mark on the ball.

When starting a hole, if you play a ball from outside the teeing area (including from a wrong set of tee-markers on the same hole or a different hole): 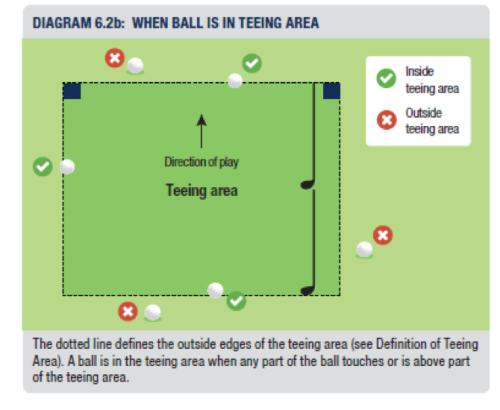 Areas of the course (Rule 2)

There are five areas of the course. The general area, which covers the entire course except for these four specific areas:

It is important to know the area of the course where your ball lies as this affects the Rules that apply in playing your ball or taking relief. 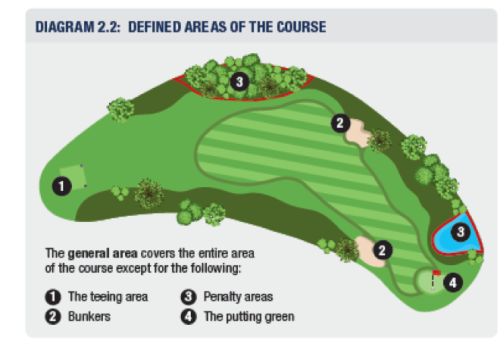 Your ball is on the putting green when any part of it:

“Damage on the putting green” means any damage caused by a person or outside influence, such as:

But “damage on the putting green” does not include any damage or conditions that result from:

Common relief situations when your ball is on the putting green are as follows: 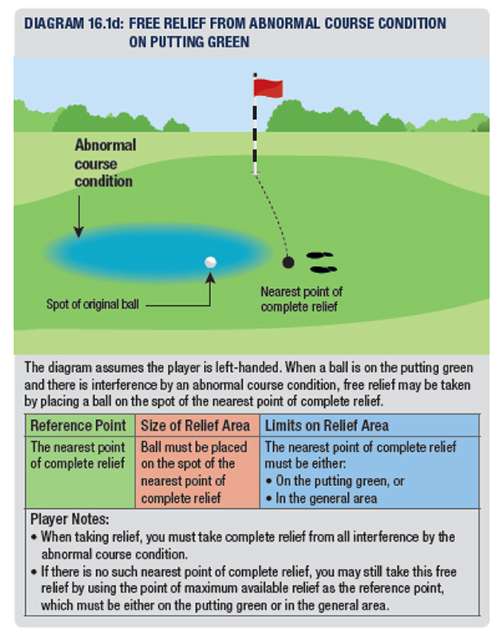 You may leave the flagstick in the hole or have it removed (which includes having someone attend the flagstick and remove it after your ball is played and is in motion), but you must decide before making a stroke.

If you make a stroke having decided to leave the flagstick in the hole and your ball in motion hits the flagstick, there is no penalty you play your ball as it lies.

Before lifting your ball under a Rule that requires it to be replaced on its original spot, you must mark the spot, which means to:

Your ball may be lifted under the Rules only by you or someone you authorise, but if your ball is on the putting green your caddie may lift it.

Your ball must be replaced under the Rules only by you or any other person who lifted your ball or caused it to move.

Your ball must be replaced on its original spot (which if not known must be estimated). Dropping Ball in Relief Area (Rule 14.3)

You may use any ball each time you take a drop.

You must drop a ball in the right way, which means all three of these things:

You have only completed taking relief when your ball dropped in the right way comes to rest in the relief area.

If that ball also comes to rest outside the relief area, you must then complete taking relief by placing a ball on the spot where the ball dropped the second time first touched the ground. 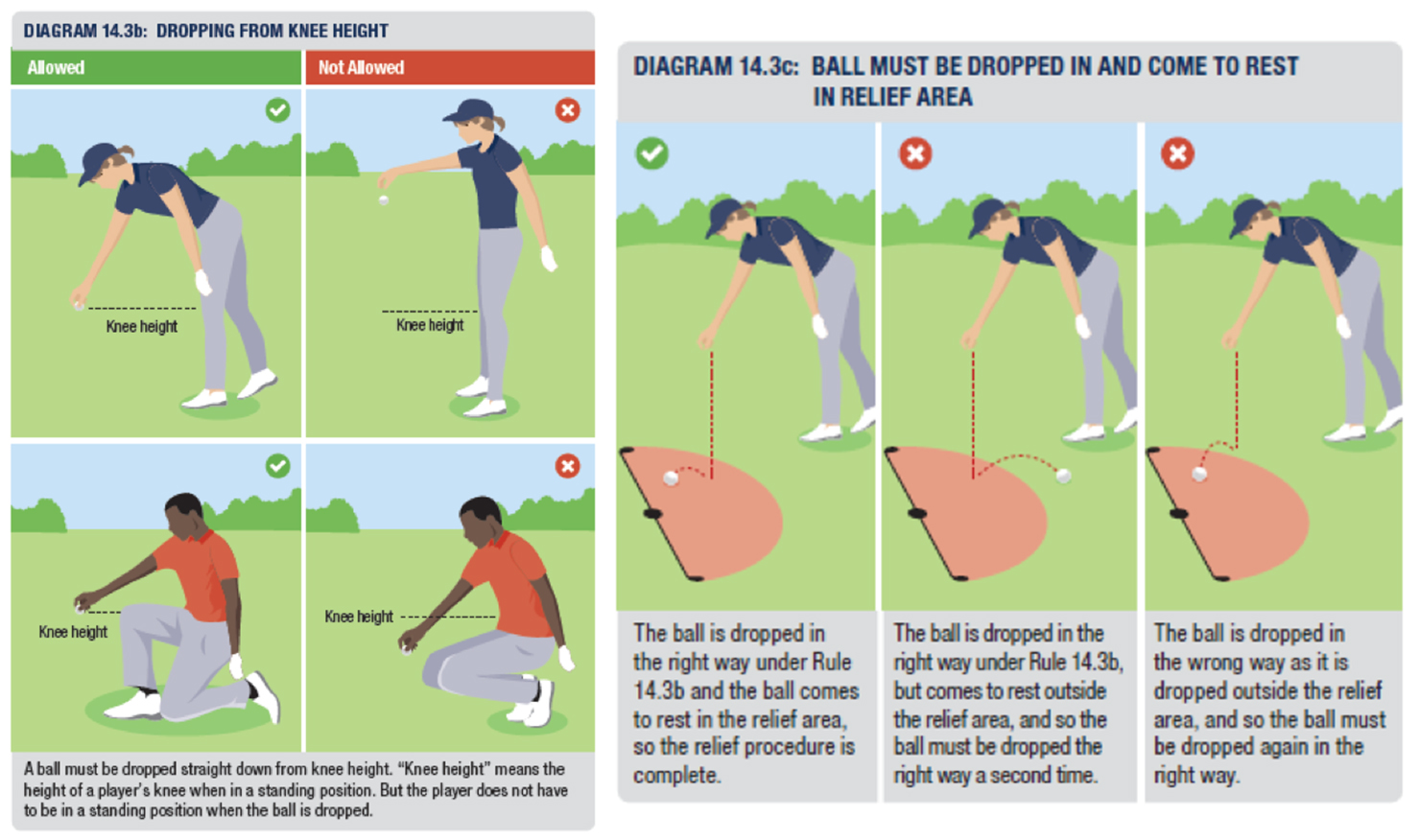 Penalty areas are defined as either red or yellow. This affects your relief options (see the diagrams below).

You may either play the ball as it lies without penalty (and there are no special Rules limiting how a ball may be played from a penalty area) or play from outside the penalty area after taking penalty relief.

Common relief situations when your ball is in a penalty area are as follows: 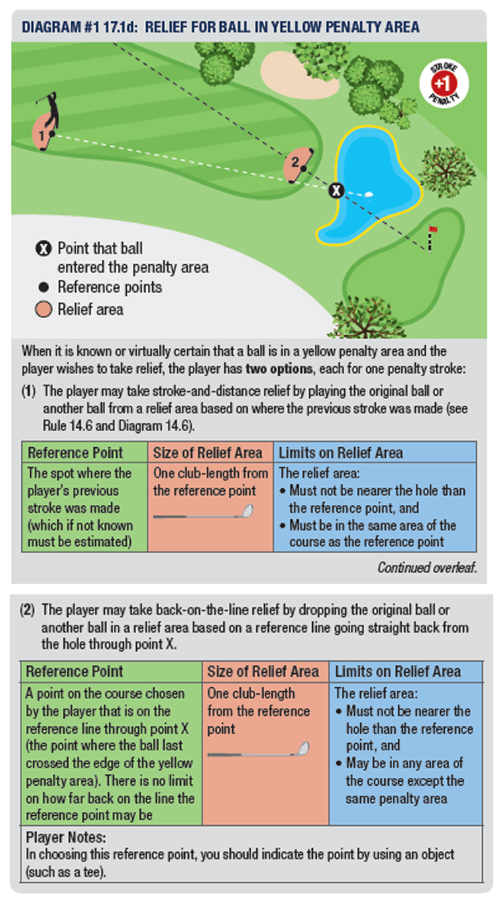 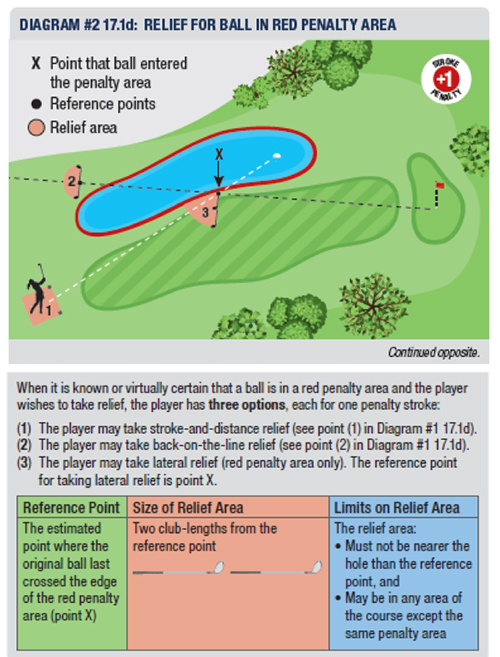 Your ball is lost if it is not found in three minutes after you or your caddie begin to search for it.

Your ball at rest is out of bounds only when all of it is outside the boundary edge of the course. 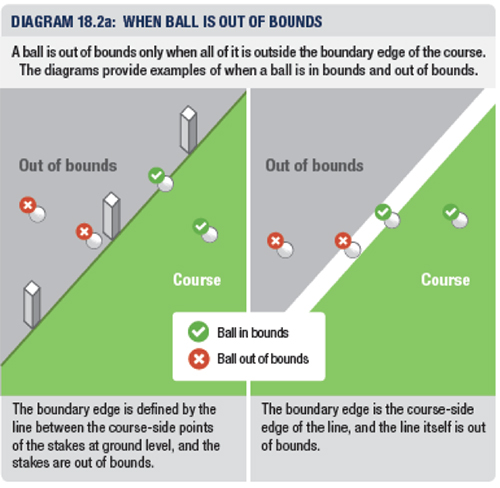 If your ball is lost or out of bounds, you must take stroke-and-distance relief by adding one penalty stroke and playing a ball from where the previous stroke was made (see Diagram 14.6).

If your ball might be lost or out of bounds, to save time you may play another ball provisionally under penalty of stroke and distance. But you may not play a provisional ball when you know your ball is in a penalty area.

Before the stroke is made, you must announce that you are going to play a provisional ball.

If you do not announce this (even if you intended to play a provisional ball) and play a ball from where the previous stroke was made, that ball is your ball in play under penalty of stroke and distance.

Your provisional ball becomes your ball in play under penalty of stroke and distance in either of these two cases:

When your provisional ball has not yet become your ball in play, it must be abandoned in either of these two cases:

You are the only person who may decide to treat your ball as unplayable. Unplayable ball relief is allowed anywhere on the course, except in a penalty area.

See the diagrams under “General area” and “Bunkers” for guidance on taking relief for an unplayable ball.